Mullein is a great expectorant, soothing coughs and congestion and loosening phlegm. It also has very mild sedative properties. As such, it is the perfect tea for colds. Be sure, however, to strain the tea through a cloth bag before serving to remove the tiny hairs that will cause even more suffering through mouth and throat irritation.

Mullein tea with a bit of milk is also useful in the treatment of diarrhea.

A sweetened infusion of the flowers, carefully strained can also be used to treat colic.

Mullein can also be smoked to relieve chronic cough and asthma. Get a cigarette machine so that you can stuff it into filtered cigarettes rather than rolling it so that the tiny irritating hairs can be filtered out.

Poultices of mullein leaves can be used for hemorrhoids.

Infusing bruised mullein leaves in olive oil yields a useful treatment for frost bite and burns. The warmed oil can also be dropped into the ear to treat ear infections as well. This oil will have anti-bacterial properties.

Tincture of mullein is useful for migraines and chronic inner-ear disorders. Take 8 to 10 drops of tincture several times a day with cold water.

Spiritual and Magical Use

If you are making your own candles for ritual, consider using Mullein stalks for the wicks. Or the whole stalk may be burnt as a candle of itself. In Indian lore, mullein is considered a sure safe guard against evil spirits and magic.

Powdered mullein can be used in spells that call for graveyard dirt. 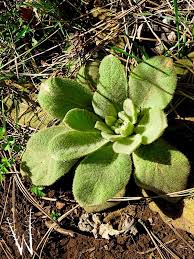