Witch hazel extract or hydrosol is made from the leaves, bark and twigs of the American witch hazel shrub Hamamelis virginiana. It is used as an astringent and for many skin conditions, to reduce swelling and itching. Among other applications, witch hazel extract and hydrosol has been used in preparations for the treatment of bruises, burns, sunburn, psoriasis, eczema, ingrown hairs and nails, blisters, cracked skin, insect bites, contact dermatitis, including poison ivy rash, varicose veins and hemorrhoids and to rinse and soothe the peritoneal area after childbirth.

Keep witch hazel extract in your herbal first aid kit for minor cuts and abrasions. It can help reduce bleeding and encourage healing. Dab some on bee stings and mosquito bites to help draw out the venom and reduce itching. (Watch for allergic reactions to stings, witch hazel will not save you if you have an allergy!)

Witch hazel is an essential beauty product for many. It may be used as an aftershave and as a daily facial astringent to reduce general redness, shine and puffiness. It can be used as a spot treatment to reduce the appearance of pimples by reducing swelling and resulting redness. A witch hazel compress will reduce swelling anywhere and is especially nice for reducing eye puffiness. A compress is also useful for varicose veins.

Witch hazel is a great addition to baby wipe solutions, but use a non-alcoholic extract or hydrosol (like This one from The Homestead Company) so as not to sting baby’s bum.

I have also used witch hazel to treat hot spots on dogs.

Witch hazel tincture may be gargled for the treatment of swollen gums, sores in the mouth, sore throats and the loss of voice.

Witch hazel has been used internally for diarrhea, ulcers, vomiting blood, and tuberculosis but these uses are not highly recommended today. While witch hazel is generally considered safe for topical uses, there isn’t much information about its internal safety, though there is some speculation that it may cause kidney or liver damage in large doses. If you do choose to use it internally, a tea can be made of the dried leaves- this is sometimes recommended for colitis. I recommend getting a personal consultation with a professional herbalist before doing this.

As with all herbal preparations, it’s a good idea to do a skin test to ensure you’re not going to have an allergic reaction before slathering your body with witch hazel. Just put a little dab inside your elbow and wait at least 24 hours for any sign of redness before you proceed.

Witch Hazel is an American native, thus it did not enter into our European-based magical system until relatively late in the game. Couple this with the fact that Witch Elm (Scots Elm) was often referred to as Witch Hazel in Europe and we might have some problems with accurate information. That being said, I will do my best.

Witch hazel branches can be used for dowsing.

The energy of witch hazel resonates with the planet Saturn. It can be burned or made into an herbal elixir to banish unwanted emotions and to remove hexes, dis-ease, and general negativity. 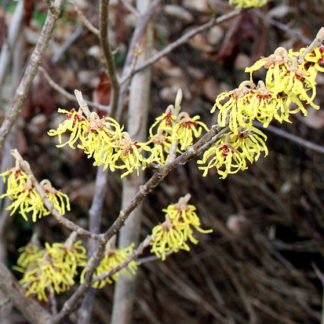